skip to main | skip to sidebar

After a long research on Kurdish music, lets move on to another part of the middle eastern music, which is Turkish Music.

TURKISH MUSIC (STYLE)
Turkish Music is not really music of Turkey, but rather a musical style that was occasionally used by the European composers of the Classical music era. This music was modeled — though often only distantly — on the music of Turkish military bands, specifically the Janissary bands.

JANISSARY
The Janissaries (meaning, new soldier) comprised infantry units that formed the Ottoman sultan's household troops and bodyguards. The force was created by the Sultan Murad I from Muslim sons in the 14th century. 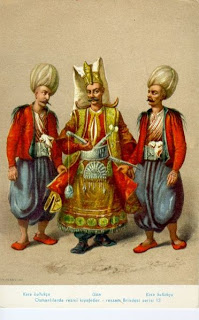 The Janissary corps were significant in a number of ways. The Janissaries wore uniforms, were paid in cash as regular soldiers, and marched to distinctive music, the mehter, similar to a modern marching band.

The military march music of the Janissaries is characteristic because of its powerful, often shrill sound combining davul (bass drum), zurna (a loud oboe), naffir (trumpet), bells, triangle, and cymbals (zil), among others. Janissary music influenced European classical musicians like Wolfgang Amadeus Mozart and Ludwig van Beethoven, both of whom composed marches in the Turkish style (Mozart's Piano Sonata in A major.

CONTINUE: TURKISH MUSIC (STYLE)
"Turkish" music is always lively in tempo, and is almost always a kind of march. ----> something to take note of.
When "Turkish" music was scored for orchestra, it normally used extra percussion instruments not otherwise found in orchestras of the Classical period: typically, the bass drum, the triangle, and cymbals. Often there is also a piccolo, whose penetrating tone adds to the outdoor atmosphere. ---> a feel/mood for Turkish music

Turkish music is one of the world's great undiscovered artistic treasures. WHY? Most traditional Turkish music is based on quarter-tone modes or scales which makes the music sound strange and many notes sound flat to Western ears familiar with half-tone scales. They aren't really flat, they're quarter-tones (the tone between two half-tones). Once you're used to them, they sound fine, and give an entirely different color to the music.

All three of the great Classical era composers, Haydn, Mozart, and Beethoven, wrote at least some "Turkish" music. (INTERESTING FACT). For more information on this, go to
http://en.wikipedia.org/wiki/Turkish_music_(style)

Another interesting fact.
Eventually it became possible to write music with bass drum, triangle, and cymbals without necessarily evoking a Turkish atmosphere, and in the later 19th century symphonic composers made free use of these instruments. Thus in the long run the Turkish instruments are a gift to Western classical music from the Turkish military-music tradition.
Posted by dauzz at 1:17 AM